Convenience, security, ubiquity and data privacy are at the center of the biometric conversation in 2017. Biometrics have become increasingly available and familiar as mainstream security solutions, and while border control has always been a major application, only recently has the biometric airport started to emerge as a major focal point of the public perception of biometrics at large. Biometric airport security is becoming commonplace thanks to larger government border control initiatives driven by multiple factors, putting identity management in the hands of authorities, in front of the public, and in the headlines of major media outlets.

None of this is much of a surprise. For years, biometric border control solutions such as eGates, automated kiosks, and electronic passports have been on the rise, and airports are a unique setting that serve not only as a terminal for human travel, but also as a nexus for the most critical topics in biometrics as a whole.

Airports are the first part of a country many visitors see, and with biometrics being integrated into entry/exit programs around the world, fingerprint, face, and iris recognition technology is inseparable from the international first-impression experience. From the US, to Germany, to China, to Australia and beyond, biometrics are part of the world’s many ways of saying hello and goodbye.

The Japanese government is a fascinating example of this biometric welcome phenomenon. In preparation for the 2020 Olympic Games hosted in Tokyo, Japan is rolling out massive biometric infrastructure changes that begin with biometric entry/exit . While this is an accountable way of tracking visitors to Japan during a time of massive tourist influx, there are also benefits for the enrolled traveler.

Trials are already underway for Japan’s pioneering naked payments system. When passengers disembark from a plane and enter the country, their fingerprint biometrics will be linked to their passport and payment information. This, in turn, will allow tourists who have scanned their biometrics at the airport to buy goods and services with nothing but fingerprints.

Biometrics were sold to the mainstream consumer because of their convenience proposition: get rid of your passwords and PINs with the touch of your finger, a glance of your iris, a turn of your face. Airport biometrics technology is no different. The proposition to the traveler is simple: moving through airport security is a special type of hell, but biometrics makes it easier.

Just like in the world of consumer mobility, contactless biometrics are making air travel more appealing. Whether it’s looking into a mirror so a camera can scan your iris, or waving your hand above a contactless reader that can capture images of all your fingerprints, friction is being removed from airport security, expediting the more laborious aspects of travel. Combined with pre-screening processed like the TSA’s PreCheck program, checking in at the airport is getting to be easier than ever before.

The logical end point to the biometrics airport convenience evolution will be a seamless experience from check-in to boarding. In Beijing, such a system may begin to emerge as early as next year, with Baidu already testing its facial recognition technology at Beijing Capital International Airport with the intention of replacing boarding passes with biometrics. The Australian government, meanwhile, has tapped Vision-Box to help it achieve a fully automated self-processing system at its international airports. 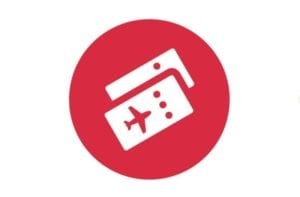 The convenience of any biometric system should never come at the expense of security, and that consideration is especially true in the airport. While it’s fun to think about the benefits biometric tech brings to world travelers, it can’t be ignored that a significant driver of new identity tech adoption at the border is national security in an age of global conflict and mass migration.

Biometrics are able to provide enhanced security within airports, flagging fraudsters immediately at points of contact, and identifying watch-listed persons. But biometrics at the airport also enhance the security of a nation as a whole.

In the United States multiple trials are underway in airports around the country, using facial recognition in an attempt to fulfill the long awaited biometric entry/exit mandate in the country. Facial recognition is being deployed on select flights, matching traveler’s faces with the biometric data on their passports. US citizens have their data discarded soon after the process, while that of non-citizens is retained. The process helps keep track of visitors, making sure no one overstays their welcome or slips through the system using another person’s passports Such powerful technology is not without its controversy, especially as it is being introduced to a relatively unfamiliar public. On a small consumer scale, we see this with the iPhone X, which has attracted criticism for its implementation of 3D face recognition technology on the basis of the technology’s creepy stigma. On a large scale, the biometric airport is at the center of privacy and civil rights talks between the government and human rights organizations.

“How long before CBP begins holding [biometric records] for longer periods of time, and using them for new purposes?” wrote Stanley. “Got a group of photos of wanted bank robbers, drug dealers, or, for that matter, reckless drivers? Why not run passengers’ photos against those databases and maybe catch a few?”

The ACLU’s concerns reflect a larger conversation happening all over the world concerning the intersection of identity, government, and privacy. The conversation are ongoing by necessity, and the airport, once again, is at the core.

Stay posted to FindBiometrics throughout September as we continue to bring you featured content on the topic of Government Applications in Biometrics.

Government Applications Month is made possible by our sponsors: NEC and Crossmatch